Goldie and Kurt are Throwing their Old Digs Overboard for $7.25 Million

Goldie Hawn and Kurt Russell are movin’ out. After 12 years, the Hollywood power couple is selling their 6,400-square-foot home in Los Angeles’ swanky Pacific Riviera neighborhood! Why? Because they’re (reportedly) building a bigger, better, newer L.A. mansion, of course! The five-bedroom, five-bathroom property is listed for a cool $7.25 million—somewhat sedate by Hollywood standards—and features plenty of laid-back charm thanks to a living room with built-in bookcases, Fren

One of the most inspiring destinations is much more than a home, it's a way of life... This exceptionally crafted custom reflects the perfect relationship between architecture and interior design. Authentic imported details are infused throughout providing sublime comfort with elegance and sophistication. Exquisitely appointed with graceful accommodations and effortless style. Sumptuous floor-to-ceiling pool and fountain views from relaxing master en suite. Create an inspire 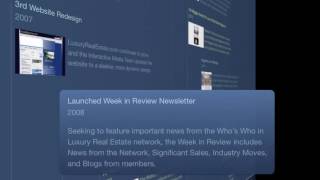 Who's Who in Luxury Real Estate Celebrates 30 Year Anniversary!

Who’s Who in Luxury Real Estate celebrates 30 years in business! Here’s a timeline of greatest accomplishments, from the first Directory that sparked the creation of the worldwide network to our new Apple TV App that showcases the best of luxury listing videos! Source: luxuryrealestate.com

Country Manor is the Perfect Blend of Discretion and Grandeur

Country Manor situated on the prestigious golf course at Oak Tree National surrounded by majestic oak trees and a champion heritage. This estate could not be more in harmony with history and modern amenities. European architectural influence is fluid from the inside out. Private access cart path and panoramic views of the Pete Dye designed course. Grand lawns and a massive wooden door with a bell tower greets you upon entrance. An original charm and splendor reminiscent of

Discover the Natural Beauty of the Countryside

Discover the natural beauty of the countryside in your own private equestrian estate on a sprawling 560 acres (mol). Resort, retreat, relax, revive. Enjoy peaceful walks and tranquil trail rides as the sounds of nature put your mind at ease. The Grand Estate home is a timeless masterpiece overlooking a great lawn, lush meadows and plenty of pasture. Watch the horses graze through tall front windows and glass pane doors. Private gated entrance and fence - lined drive offers

Pokemon Licensing Executive Al Kahn May be on the Search for a New Home and Asks $18.95 Million for

Al Kahn, the man who loosed Pokémon on the masses, is selling his four-story penthouse apartment in midtown Manhattan for US $18.95 million. Mr. Kahn, 69, a licensing executive, introduced a number of animated series to the U.S. and global markets, including Japanese imports “Pokemon,” and “Yu-Gi-Oh!” He also came up with the term “Pokemon,” after deciding its original name “pocket monsters” sounded too Americanized. He is asking $18.95 million for his four-story penthouse at

A Turnkey Five-Bedroom Home on the Hawaiian Island of Maui